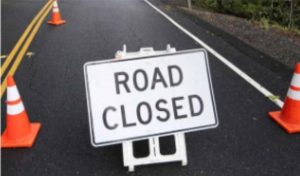 Update at 4:44pm: Sonora Police have some hard closures in place while repairs are being made to a waterline break.

The failure, which happened late in the 3 o’clock hour, has not closed down Washington Street, the main drag through downtown Sonora. However, Bradford Street is now closed between South Washington and Norlin streets. Additionally, South Green Street between West Linoberg and West Jackson streets is also under a hard closure. These will remain in place until repairs can be made.

Original Post at 3:56pm: Sonora, CA — Due to a water pipeline break in downtown Sonora, police have temporarily closed Bradford Street between Washington and Green streets.

Police officials say the break is near The Candy Vault and Tuolumne Utilities District (TUD) crews are en route. They add that Washington Street remains open but use caution. There is no estimate as to how long Bradford Street will be closed.