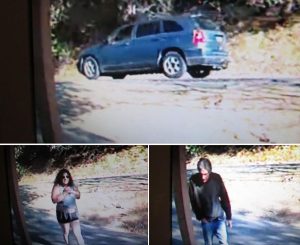 Sonora, CA — An investigation is underway following a burglary in the Sonora area.

The Tuolumne County Sheriff’s Office is not releasing much information at this time, but it seeking help from the public in locating the two suspects shown in the images. The Sheriff’s Office has also released a photo of an associated vehicle. Anyone with information on who the two people are should call dispatch at 209-533-5815.