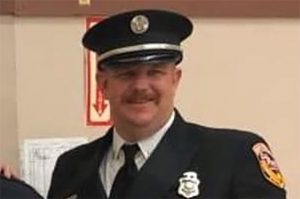 Update 4:30 p.m.: New details are emerging regarding the tragic death of 36-year-old CAL Fire Captain Paul Rotondaro. The Merced Unit of the CHP reports that he died in a fiery crash on Highway 140 in the Gustine area of Merced County. CAL Fire spokesperson Scott McLean relays, “Before 8 o’clock this morning he was involved in an automobile accident and unfortunately perished due to his injuries. He had just finished his shift at one station and was headed to another station in Merced County to start another shift.”

The CHP reports that after Rotondaro’s Ford pickup was hit head-on by another pickup, Rotondaro’s truck went off the highway and caught on fire while he was trapped inside. The driver of the other pickup also died in the collision. That driver’s identity has not been released pending notification of family.

McLean details that Rotondaro was a Fire Captain on an engine. He was a 13-year veteran having been with CAL Fire since 2006. McLean shares, “He was a very intelligent young man. He’s the type that wants to help others whenever he can. Very dedicated and loyal to his peers and he had a humorous streak as well.”

Rontondaro is survived by his wife, Jennifer; 13-year-old daughter, Kiersten; and 16-month-old son, Wyatt. The crash remains under investigation. A CAL Fire statement regarding the Captain’s death is below.

Original post at 10:15 a.m.: Mariposa County, CA — CAL Fire reports that a fire captain from its Madera-Mariposa-Merced Unit has passed away.

This morning the agency directed flags to be lowered to half-staff at all of its statewide fire stations and offices following the death of Captain Paul Rotondaro. The agency has put out a statement reading, “We are deeply saddened to report that this morning Fire Captain Paul Rotondaro, from the CAL FIRE Madera-Mariposa-Merced Unit, was killed in a vehicle accident. Please join us in keeping Paul and his loved ones in your thoughts.”

No further details are immediately available from CAL FIre, and we will pass along more information when it becomes available.