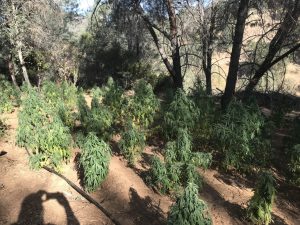 Sheriff’s spokesperson Sgt. Andrea Benson reports, “Our office received a tip from a rancher regarding a possible illegal marijuana grow on a piece of property in the area of Highway 108 and OByrnes Ferry Road. The rancher reported there was a water line that led into the ranch that was pumping water from a pond.”

Rural crimes staff checked the area and found the waterline last Friday, and a U.S. Forest Service helicopter along with teams from the Fish and Wildlife Department, and Bureau of Land Management was subsequently called in to assist in eradicating 366 plants that measured between two and three feet in height.

Although Benson says that officials did not find anyone in the area, they located a camp and sleeping area near the grow along with a large amount of trash.