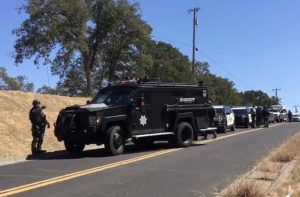 Sonora, CA — The Tuolumne County Sheriff’s Office was involved in an eight- hour standoff with a wanted man at a home in La Grange.

It happened yesterday morning at a residence along Avenida Central. Deputies learned that 35-year-old Victor Medina allegedly physically assaulted a female victim and threatened her with an ax. The victim was able to eventually escape, but while doing so, Medina allegedly grabbed a rifle and pointed it at her.

Sheriff’s Office spokesperson, Sgt Andrea Benson, says, “Medina was wanted on several warrants for assault with a firearm, false imprisonment, and discharging a firearm negligently. Due to the nature of the incident and Medina’s past violent behavior, the Tuolumne County Sheriff’s Office Crisis Response Unit (comprised of SWAT operators and Crisis Negotiators) responded.”

The SWAT team broke through a window and Medina was physically taken into custody. The Sheriff’s Office reports that Medina tried to fight off deputies, so they were forced to use a taser on him.

Medina is prohibited from having firearms as part of the terms of a domestic violence protective order, and officials found several firearms, ammunition and high capacity magazines in his home. Medina was booked into the county jail on outstanding warrants, as well as new charges of resisting arrest, criminal threats, spousal abuse, false imprisonment, and various other offenses.