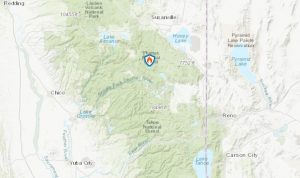 Taylorsville, CA — Some local firefighting resources have been sent up north to help battle the 43,931 acre Walker Fire in the Plumas National Forest.

It is the largest incident that California has had during the 2019 summer fire season. The blaze is 11 miles east of the community of Taylorsville and is seven percent contained.

The fire grew by nearly 20,000 acres this past weekend due to sustained heavy winds. Firefighters were forced to back up and seek new containment lines further out. There are mandatory evacuation orders in place for residents along Highway 395 near the fire zone.