Electrical Malfunction Cause Of Deadly Fire 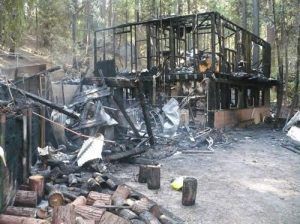 Sonora, CA — CAL Fire investigators and the Tuolumne County Sheriff’s Office have determined that an electrical malfunction was the cause of a deadly fire last Wednesday evening on South Fork Rd. in the Twain Harte area.

According to Sgt. A.J. Ford the fire was accidental in nature due to insufficient wiring to the water heater.

The fire was controlled shortly after midnight.