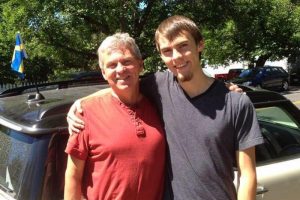 Murphys, CA — Chuck Hovey, one of the pioneers who helped mold the local winemaking scene, has died.

Word about his death on Tuesday evening passed quickly to the tightknit winemaking community in Murphys. He had been battling health issues. Hovey spent around 24 years with Stevenot winery, 20 of which as the Director of Winemaking, during a period that saw massive growth in the local industry. He was considered a strong mentor to many who worked under him and went off to start other winemaking ventures.

After leaving Stevenot, following the sale of the business by its founder, the late Barden Stevenot, Hovey served as a consultant and winemaker for several wineries, including some in Tuolumne County like Gianelli, Inner Sanctum and Hurst Ranch. He also introduced his own Hovey label, with a first vintage in 2007. In 2012 he opened a tasting room on Main Street in the former home of Albert Michelson, and the business continues to operate.

Hovey received countless awards and recognition for various varietals and he is particularly remembered for his work with Chardonnay and Tempranillo.

Hovey battled high profile health issues in 2015, including a severe stroke, which forced him to cut back on his work, but he still had a presence.

Funeral services for Hovey are pending.