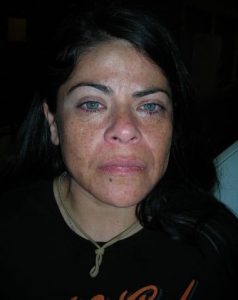 Sonora, CA — Thanks to a citizen that didn’t mind getting “involved,” 41 year old Danelle Marin is in the Tuolumne County Jail today.

Sunday evening at 7:49 Sonora Police were notified of a potential drunk driver on Stockton Rd. An unidentified motorist reported following Marin’s vehicle on Stockton Rd. but couldn’t catch up to her. Prior to officers making contact with Marin she crashed her vehicle on South Shepherd. St.

When officers did make contact they discovered Marin and her six year old son uninjured in their vehicle.

According to Sonora Police Chief Mark Stinson this is not his first contact his department has made with Marin. On February 2 her son called 911 to report that his mother had passed out in their residence. Officers discovered that she was under the influence of meth. In that instance Marin was charged with being under the influence and child engangerment.

On both occasions her child has been placed under the care of Child Protective Services.