One Person’s Passion For Occupy Sonora 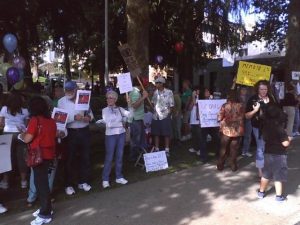 Heather Nordstrom was Friday’s KVML “Newsmaker of the Day”.

A few weeks ago, Nordstrom was excited to hear of a local movement called ‘Occupy Sonora’ and wanted to participate.

“I’ve been following Occupy Wall Street, which captured my attention and my heart and I wondered if there was something that we could do locally. I spotted a page on Facebook called ‘Occupy Sonora’ and saw that there would be Saturday gatherings at Courthouse Park”, said Nordstrom.

“I care about people and my community. I’ve never been an apathetic person. So I thought this was a great opportunity to make change, stand up and speak out.

When asked what specific changes she would like to see, Nordstrom replied, “Unemployment in Tuolumne County is 12.7%. The cost of living is high. Some people can’t afford food. There is hardship all around us. It’s local, but because it’s local it’s widespread, making it a global problem.”

“I would like to see apathy erased, for people to care, step forward, start talking and support local business. If we had local sustainability it would have a local impact here. Recently, we’ve had two restaurants close in Sonora and Andys Hardware announced they will be closing as well.”

“Occupy Sonora has no central spokesperson. We are a grass roots movement… by the people for the people. We are not a bunch of hippies, anarchists, union workers or just students. It’s a variety of local people who care.”

Nordstrom is a business owner and invites people who would like to find out more information about possible upcoming events and gatherings to contact her at heather@occupysonora.org