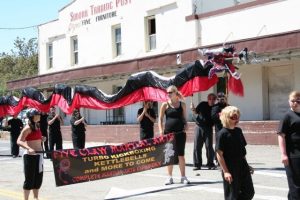 Sonora, CA– The owner of a Sonora martial arts studio has been the victim of a theft.

Dan Sandelin, owner of Five Claw Martial Arts says an unknown suspect or suspects broke into his trailer at his business on 14317 Mono Way and stole parts of a popular Chinese dragon attraction.

“When I went out to the trailer this afternoon, I noticed that the side door was jimmied open so I opened it up and realized that the drum that we use in parades at all the events was gone,” said Sandelin. “And the tub that has the dragon’s body and all lion dog suits are gone too. The last time I saw everything was Tuesday.”

He says the three dragon heads and the tail were not stolen and remain at the martial arts school.

Since 2005 the Chinese cloth dragon has been featured in the Mother Lode Roundup Parade. Other events include the Sonora Christmas Parade and the annual Sonora Relay For Life celebration.

“I just want it back, said Sandelin. “If someone could just put it back, drop it off by the door, nothing said, no questions asked, just get it back to me.”

The stolen items, originally shipped from China, are estimated to be worth $2,500. Anyone with any information regarding this theft can contact Dan Sandelin at 532-6306 or the Sonora Police Department at 532-8141.