Many Still Undecided About Tax Plan 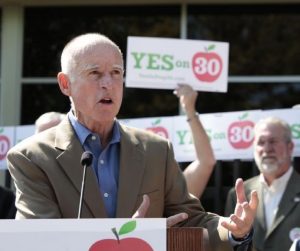 The latest Field Poll shows that some California voters are going back-and-forth about whether to support the Governor’s tax initiative.

It finds that 48% approve of Proposition 30, 38% are against, and 14% are still undecided. Support has waned for the plan over the past several months. In July, 54% of likely voters stated that they were in favor, and in September the number was 51%. Data shows that the number of “undecided” voters has grown over that span. It was 8% in July and 13% in September.

Governor Jerry Brown has been speaking at events over the past several days in favor of his $6 billion a year tax increase. The Governor is proposing to raise the state’s sales tax by a quarter of a cent, and increase the income taxes paid by earners making over $250K, primarily to help fund education. At rally in Southern California yesterday, the Governor stated that there will be “painful cuts” if the tax measure does not pass. Leading Republicans have argued that the tax measure is the wrong approach.

The election itself is coming up on Tuesday.