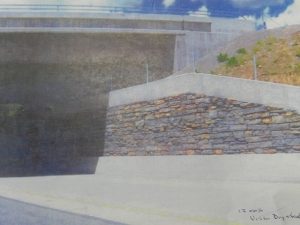 The funding is in place for the Mono Way widening project, running from Greenley Road to Fir Drive.

Funding will come from traffic impact mitigation fees that have been paid by developers to both the city and county since 1987. 90 percent of the $3.5 million will come from the county and 10 percent from the city. This morning the Tuolumne County Supervisors voted 5-0 to approve the county’s $3.2 million share.

It was noted that the project could come in slightly over budget, because of plans to upgrade by $95,000 a planned retaining wall on the north side of Mono Way, near Fir Drive. The photo is a rendering of what it will likely resemble. The retaining wall will extend 1,365 ft., and it would have the appearance of a stone wall, rather than a simple slab of concrete.

Construction should start early next year and the overall project will take around six months to complete.