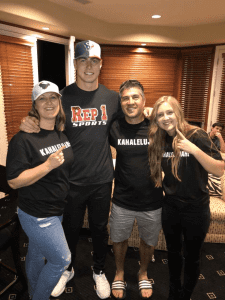 Kahale Warring with Mom Nichole, Dad Lloyd and sister Alexis Longeway after the 2019 NFL Draft when he was picked by the Houston Texans

Sonora, CA — Sonora High School graduate Kahale Warring spent draft night with family and friends in San Diego, and this week he has been back in his hometown of Sonora.

Many students were surprised to see him drop by Sonora High School on Monday to work out and “run the stairs.” He saw the band instructor, Mrs. Denton, and was given the opportunity to deliver an impromptu speech to some of the students. Many others in Tuolumne County have been offering Warring congratulations over the past few days. In an interview with Clarke Broadcasting, giving a chuckle, he stated, “I’ve definitely heard from a lot of people.”

We reported last Friday that Warring was selected in the third round of the NFL draft, 86th overall, and will join the Houston Texans.

He says, “I couldn’t be happier because the Texans were one of the teams I wanted to go to the most. I can’t wait to get out there.”

He will report to the team next week, on May 9, but in the meantime he is getting ready for the transition to football’s top level. “First of all is just learning the playbook,” he says. I’ve been talking to my guidance coach every night, about seven o’clock, and going over new things each day. My overall goal is to earn the trust of my teammates and coaches right away.”

The last Sonora High School Graduate to play in the NFL was fullback Josh Parry who went un-drafted in 2001, but went on to start for the Philadelphia Eagles.

Warring declared for the NFL after his junior season at San Diego State University where he was an all Honorable Mention Mountain West Conference Selection. He finished his final year with 31 catches for 372 yards. Prior to be taken in the third round by the Texans, Warring had a successful NFL combine where the 6’6″, 250 pound tight end, ran the forty yard dash in 4.67 seconds.

Many scouting reports touted Warring’s athleticism, work ethic, and natural talent as setting him apart from other tight ends that were taken later in the draft. Warring did not take up football until his senior year in high school. It is unknown how much playing time he will see during his rookie year. Several national sports publications currently project Warring to land somewhere around third on the Texans tight end depth chart. The Texans have several questions about the position, as last year’s starter, Ryan Griffin, is recovering from off-season surgery, and was arrested last week for allegedly punching out a hotel window.