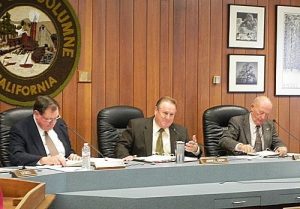 Sonora, CA — A vote to request state grant money to help update the General Plan was nearly voted down over concerns about too much state influence.

The Tuolumne County Supervisors voted 3-2 to request $220,680 from the “Sustainable Communities Planning Grant and incentives Program.” The money would be used to update the Land Use and Circulation Elements of the county’s General Plan.

“This whole process and document is laced with nasty ideology in my opinion,” said District Three Supervisor Evan Royce. “I’m just not comfortable with it.”

With a different perspective, Supervisors Dick Pland and John Gray both argued that the state is mandating that all counties update the General Plan, so it is only logical request the state grant. Gray said he would rather receive money from the state, than take it away from local “quality of life” services like libraries and the recreation department.

Supervisors Royce and Randy Hanvelt feared that there could be strings attached in accepting this type of grant funding, and that there could be state influence to implement policies that do not fit the community. “I feel that it’s a dirty trick that the state plays on us, and I don’t like playing into that,” said Royce. “Maybe you’re right and it is the best way to get the money, but I don’t like playing that game.”

Supervisor Pland then argued that the county should not be worried about strings attached. “Let me say right out, that nothing goes into that General Plan that this Board doesn’t approve. Period.”

The final vote was 3-2, with the support of Pland, Gray and Supervisor Liz Bass.