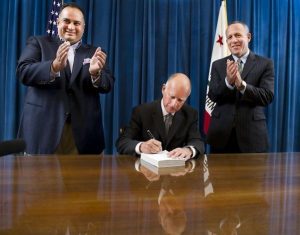 Sacramento, CA — California has a budget for the next fiscal year.

This morning Governor Jerry Brown signed the $96.4 billion spending plan for the fiscal year that starts July 1st. “California’s finances are in very solid shape for the first time in a decade,” said Brown. “We’re making significant investments in the things Californians care most about – the education of our children and adequate health care.”

The Governor’s Office has released the following information regarding what Brown believes are the highlights. It reads as follows:

The budget adds $2.1 billion for first-year implementation of the Local Control Funding Formula – which replaces today’s overly complex, inefficient and inequitable finance system for California’s K-12 schools. Districts will receive a per-pupil base grant, a supplemental grant based upon the number of students who are English learners, students from low-income families, and foster youth, and a concentration grant for districts with over 55 percent of this targeted population.

Building on California’s early establishment of a health benefit exchange and the early coverage expansion through the “Bridge to Reform” waiver, the budget aligns with the federal Affordable Care Act (ACA) in a prudent way while maintaining a strong public safety net. The budget enacts a state-based approach to the optional expansion of care allowed under federal law. Over time, as the ACA becomes fully operative, funding previously provided to counties for indigent health will be shifted to fund human services programs.

The budget establishes the first-year investment in a multi-year stable funding plan for the University of California and the California State University systems. Each system will receive a 5 percent increase of $125.1 million – the first stage of a four-year funding schedule that will result in a 20 percent general fund increase for the systems. The systems will also receive $125 million in 2013-14 for not increasing student tuition and fees in 2012-13. The budget also provides a year-over-year increase of $228.6 million in general fund dollars and local property taxes for California Community Colleges.