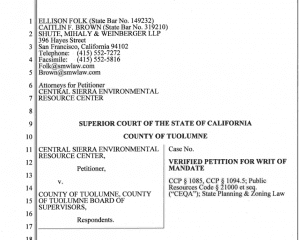 Sonora, CA — After giving the county a heads up that litigation was on the way, the Central Sierra Environmental Resource Center (CSERC) officially filed a lawsuit against the General Plan Update.

The major argument highlighted in the 20 page lawsuit from CSERC is that the plan lacks clarity over how new development projects will be required to mitigate for creating additional greenhouse gas emissions that the state has identified as a contributing factor to climate change.  You can read the full lawsuit by clicking here.

CSERC Executive Director John Buckley, who spoke at both the Planning Commission and Board of Supervisor meetings regarding the General Plan Update, argues that the plan weakens conservation requirements. He says, “I am personally disappointed that there is no other path forward than having to sue. Our center bent over backwards to let county officials know that there could be litigation if key flaws in the revised General Plan were not corrected. But the county showed no interest in compromise or middle ground on any of the issues.”

Many members of the business community came out and showed strong support for the plan during the county meetings, arguing that the old plan was outdated and strongly in need of a revamp. Tuolumne County Business Council Co-chair, Jeff Redoutey, tells Clarke Broadcasting, “Unfortunately we were not surprised by the action of CSERC (lawsuit) because they have been litigious in the county, historically. With that said, we are very disappointed. We think the county did a great job on updating the General Plan and clarifying the process for somebody looking to make an investment in this county. We think the staff did a very thorough job. Obviously years of work went into this document, and we really don’t understand what this litigation is going to accomplish.”

The lawsuit will likely delay the implementation of the General Plan while the legal dispute plays out in the court system. Leaders in the county had earlier indicated the belief that the document will hold up if challenged by a lawsuit.