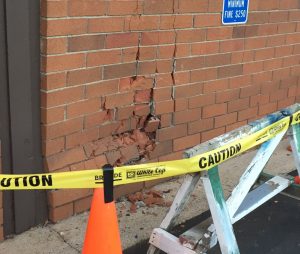 Sonora CA- A mistake made while attempting to park provided Sonora Elementary eighth grade science students with a lesson in inertia as a car crashed into their classroom wall.

School District Superintendent Leigh Shampain recounts the incident happened Tuesday morning in the ten o’clock hour. “There was a person…dropping off an employee of Sonora Elementary and was trying to park…instead of pressing on his brake, he hit the accelerator and went straight into the wall, damaging the wall and inside wall of the classroom,” he shares.

Fortunately, he says, nobody in the vehicle or the classroom was injured. However, the accident caused considerable exterior and interior damage from the brick and mortar wall into the inside cabinetry. “We are still trying to get an appraisal on the damage from our insurance company,” Shampain explains, adding that district officials were calling for estimates and researching ways to put up a barrier in the parking area that would further permanently protect the wall. The parking area, he says, was a small one, used as a short-term emergency drop off spot.

The car hit the end classroom in the D building. Shampain says that eighth grade parents were informed of the incident by school officials.

While she temporarily moved her classes to the library, the superintendent says the room is now useable. “We removed the cabinet from the wall so we can look at the pipes, some of which were damaged.” He adds, ” We will secure it so it is safe and no one will get hurt from the open wall…and we will block off the outside wall with a barrier.”