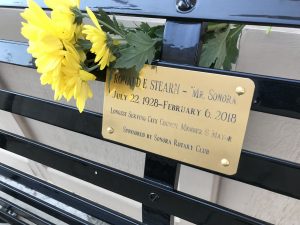 He passed away in February at the age of 89. This week members of the Sonora Rotary Club dedicated a bench in honor of Stearn outside of Sonora City Hall. A plaque reads, “Ronald E. Stearn, Mr. Sonora, July 22, 1928 – February 6, 2018, Longest Serving City Council Member & Mayor.”

Members of Stearn’s family were on hand for the dedication.

Stearn is remembered as a very likable straight shooter who always had a story to tell, loved the city, and was a go-to-source for any questions about its history. He was sworn into office in April of 1964 and he retired in 2016.