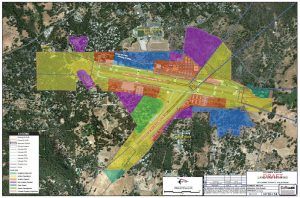 Columbia, CA – A windfall of surplus federal funds are funneling towards fixing even more of the failing pavement at Columbia Airport sooner than later.

In an interview with Clarke Broadcasting, Tuolumne County Airports Manager Bennie Stuth, recounts that project plans originally submitted for Federal Aviation Administration (FAA) funding approval were much larger in scope than what the just over $2 million that the county received earlier this year would cover. So, the supervisors approved awarding the base bid, which covered renovation costs for about 91,000 square feet of pavement refurbishment.

However recently, the FAA found additional available funds and called a few airports, including Columbia, which resulted in another $1.2 million. “Now we are at about $3.2 million…the extra $1.2 million will result in probably about an additional 100,000 square feet of pavement,” Stuth enthuses. “Looking at the entire scope of the project, back in 2016 we had undertaken another larger reconstruction project that touched two of the three main taxiways…which was roughly about 30 percent of our movement surface.”

The extra influx of FAA monies, he shares, will touch roughly another 30 percent, which brings the total rehab up to roughly two-thirds of the airport’s surface areas. As he explains, “It is going to get us well underway in tackling the infrastructure issues that Columbia Airport currently has — and it moves us further along in realizing a lot of the future projects that we are going to be attempting to accomplish over the next few years.”

The landing of the multi-millions in funding at Columbia Airport is kind of like a cranked up flywheel beginning to turn in earnest. As Stuth describes the grant process, the bulk of the heavy lifting occurred four years ago, when he came on board with the county and restarted the grant process.

“We got a couple of projects to take care of pavements and get plans in place — and really show the FAA that we are good stewards of the public monies that they are giving us,” he explains. “The other side of that story is having the type of projects that are eligible for that type of money, like pavements, which are high on the FAA’s funding list due to their safety component,” he adds. “Our [airport plan] is realistic and reasonable and achievable…it makes the decision on the FAA’s side easier.”

He admits that spending a year working for the FAA in a mirror capacity, has given the county a leg up in the system, knowing how the process works, who to talk and how to plan for each part.

Stuth expects that the draft master plan itself, which has been almost three years in the making, will come before the supervisors before the end of the year. It addresses needs and proposals covering the next five to 15 years. Asked if it includes much in the way of expansion, he chuckles. “You have to prove that you can take care of the simple first and show that you can do it correctly and well…then you can start to get into the really complex stuff,” he replies. “By showing we are a good steward, FAA will say ‘what next and how can we be a part of it’.” (To view some images from the draft package, click into the image box slideshow.)

The federal funds for the airport project come with a ten percent local match requirement. While state transportation funds, according to Stuth, formerly could provide five percent the contributions now come with a $50,000 cap. Previously, the county was on the hook for $150,000 for the initial FAA funding round; with the additional grant monies, it will need to provide another $150,000. The obligation he says will split between a one-time general fund allocation and from savings that the airport has through its own budget.

Because of the late arrival of the additional funding approval, Stuth says that the county will be taking a multi-construction window approach. “We have already identified what can be done before the rains,” he says, adding that concrete reconstruction and rehabilitation will begin and complete by November because that work will have the least amount of impact, per se, and not affect the bulk of users.

Come next spring, planned asphalt work will take an estimated 75 working days. “It is more complex…so those areas will be taken out of play for about two-and-a-half to three months,” Stuth confides. He stresses that phasing the work will minimize impacts as much as possible and not affect CAL Fire operations.