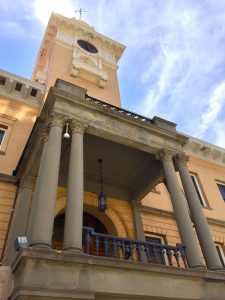 Sonora, CA — After deliberating a few hours yesterday afternoon and a couple more this morning the jury came back with mostly guilty verdicts in the case of a local physician charged for triggering a deadly crash.

Just after noontime today, Judge Donald Segerstrom welcomed back the jury of eight men and four women after they signaled around 11:30 that they had reached unanimous decisions on the charges against Sonora doctor Danny Anderson.

When court reconvened, just ahead of reviewing the paperwork, the judge took time thanking them for their work and patience over the past month-plus, as reported here, that it took to seat a jury and conduct the trial.

A Call To Keep Emotions In Check

He then addressed the nearly full courtroom, acknowledging to the audience that while the case was a highly emotional one, out of respect for all concerned that he would not tolerate any shows of emotion. “The jury has worked very hard and diligently and deserves your respect,” he directed, adding that anyone who could not abide by his words to immediately leave the chamber. No one budged.

Dr. Anderson, wearing a dove-colored suit, continued to sit alert and nearly motionless as he learned that the jury found him guilty of three counts of gross vehicular manslaughter in the deaths of teen driver Trista Hoffman and her mother Tina, 51 of La Grange; and of Rheinholt Eisemann of Copperopolis, the  71-year-old husband of the second vehicle’s driver, Dorothy. They also decided he was guilty of delaying an investigation by lying to police; hit and run causing death or great bodily injury; reckless driving causing injury; however, they found him not guilty of concealing evidence.

A Decision To Not Take Accountability

Anderson triggered a multi-vehicle crash in October 2016 on J59/La Grange Road after crossing over double-yellow lines to speed past vehicles in front of him. Trista and Tina Hoffman were both pronounced dead at the scene. Eisemann, died a few hours later. His wife Dorothy — along with Trista’s passengers, brother Dillon Hoffman and Annie Jonson — all suffered serious injuries.

Summarizing what the investigation determined, Tuolumne County District Attorney Laura Krieg stated that Anderson returned to the scene and told CHP officers that he had come upon the collision and had stopped to help. However, when asked if he was a witness or was involved, he indicated he was not and left the scene without ever identifying himself as a party that passed or was involved in the collision.

Following a lengthy investigation that included obtaining video surveillance from nearby businesses the CHP identified Anderson’s white Acura MDX as the vehicle witnesses described as passing and causing the collision, as reported here.

Sentencing, Another Trial Ahead

Segerstrom scheduled Anderson’s sentencing for Sept. 7, during which Krieg stated there would be readings of victims’ impact statements. She adds that he faces a maximum of ten years and four months in state prison.

Before dismissing the proceedings, at the request of Anderson’s attorney Tom Johnson, the judge allowed that the doctor could remain free on bail pending sentencing, but ordered him immediately to the Probation Department for fitting with an electronic monitoring device. Although Krieg requested that Anderson surrender his passport, since he stated he did not have one it became a moot point.

Anderson’s wife Diane was among the dozen or so in the court audience supporting her husband. Being tried separately as an accomplice, she is scheduled to appear for a pre-trial hearing on Aug. 13.