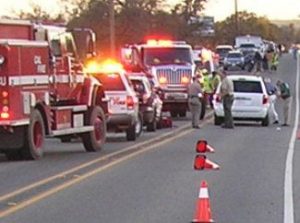 Sonora, CA — A Sonora doctor has been notified that felony charges are being sought against him in connection to a horrific motor vehicle accident that claimed three lives last October.

After an extensive multi-agency investigation led by the CHP/Sonora Unit, spokesperson Officer Faustino Pulido states that 69-year-old Danny Mundall Anderson was identified as the driver of a white 2015 Acura MDX that, while crossing double-yellow lines into oncoming traffic, triggered a two-vehicle collision. Anderson is publicly listed as an independent physician of internal medicine with medical privileges at Sonora Regional Medical Center.

The resulting crash caused the deaths of an elderly Copperopolis man and a mother and daughter from La Grange. It also seriously injured the girl’s male teen sibling and another teen female. As reported here in detail, the accident occurred Oct. 21 just before 4:30 p.m. on J-59/La Grange Road near the Bond Flat Road intersection.

Officer Pulido states that a report has been submitted to the Tuolumne County District Attorney’s Office requesting felony charges be filed, and that Anderson is expected to self-surrender once formal charges are made. The officer adds that tips from the public that came in following the CHP’s request for help (reported here) greatly aided Officers Joelle McChesney and Jason Austin in their efforts to assemble the various puzzle pieces of their investigation.

He adds that the Sonora Area CHP is still seeking a possible witness to the collision, as a gray 1990s minivan similar to a Toyota Sienna was observed traveling northbound on La Grange Road at the time of the collision. Anyone with any information regarding this vehicle should call the CHP office at 209 984-3944.