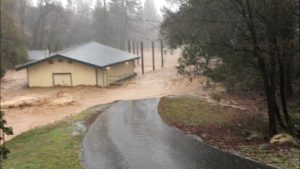 Flood damage by the amphitheater at Mary Laveroni Park

Groveland, CA — The Groveland Community Services District (GCSD) released an update on the Mary Laveroni Park restoration and severe damage to its other properties after the March 22 flash floods.

District officials described the destruction to the sewer system detailing how an enormous amount of stormwater caused several sewage pumping stations to overflow and in turn break the concrete drainage manholes. That allowed debris to flow into the system uncontrollably. Additionally, pipes blew apart nearly causing the wastewater plant holding pond to overflow its banks and several roads were washed out.

At Mary Laveroni Park, the entire lower parking lot washed away down a nearby creek with the debris ending up on a grassy area of the lower park, which has deep ruts due to the raging waters, according to GCSD  General Manager Pete Kampa. The flood waters also undermined the foundation of the concession stand and amphitheater. Kampa notes, “We don’t know if we can rebuild those structures in the same location because they are basically directly adjacent to the creek bottom.” Some of the options, according to Kampa, “Whether it’s channelizing the creek better to keep it further away from the buildings or modifications to the foundations or retaining walls or diversion walls, all are being investigated.”

To repair the asphalt, clear the debris and fill the ruts with gravel the initial cost is estimated at nearly $130,000, according to Kampa, which does not include replacement of the concession stand, water, electrical or other lower park fixtures. He adds that they also need to consider whether buildings in the flooded area need to be relocated away from the creek, or rebuilt to withstand flood waters in the future. While he indicates that insurance will cover the structures, the deductible is $250,000, forcing the district to look for other funding. Currently they are working with the state and FEMA to foot some of the bill, but Kampa stresses, “Unfortunately, sometimes it takes a long time to get that money from FEMA or the state. So, meanwhile, we are getting ready to start fund raising at minimum to be able to get the money together to fund the gravel to refill the ruts to make it safe.”

In turn, Kampa relays that the public is ready to pitch-in, “We’ve already had some offers for donated equipment and some manpower to do some hand clearing.”  The idea is to have volunteers work organized events rather than try to clean up themselves, as Kampa explains, “It is a little bit dangerous with all the glass and other sharp objects in the grass.”

Kampa sums up that the delay in the repairs and reopening of the lower park area can be attributed to all the above issues. He also points that they are a government agency and are required to closely adhere to the many state water quality permitting and environmental laws associated with filling areas, or building adjacent to the creek, which all takes time.

For safety reasons, visitors are asked to keep out of areas blocked off with temporary fencing. In regards to coming events at the park, Kampa expects that some of the bigger festivals later in the summer and other events go on, but an annual flea market will have to be moved. He clarifies, “We should be able to get the park in order. I’m guessing in about a month to a month and a half to be able to be used all except for the concession stand and potentially the amphitheater area.

Those wanting to volunteer for fundraising and/or clean-up duties are asked to check out the districts website where information will be posted.