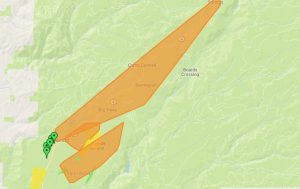 Update at 5:30pm: Another jump in the number of PG&E customers losing their power this afternoon in the Arnold and Avery areas along Highway 4 in Calaveras County. The figure has climbed to just over 6,100 customers without lights. There are an additional 430 customers east of West Point that are also still in the dark.

A little better news in Tuolumne County as originally nearly 5,000 customers from Cedar Ridge to Twain Harte had no electricity and that number has dropped to around 1,430.  The company has attributed of these outages to trees coming down onto power lines and poles damaging electrical equipment. Most of these outage have no estimated repair time posted by the utility.

Update at 1:20pm: There are some new power outages as the wet weather continues to wreak havoc in the Mother Lode.  The latest is east of West Point impacting nearly 215 customers. Also in Calaveras County, the areas of Arnold and Avery along Highway 4 are the hardest hit with nearly 1,500 customers without power.  There remains 29 customers without electricity north of Mountain Ranch, where crews discovered equipment damaged on a power pole. The company gives that as the same cause in Twain Harte where nearly 225 customers are without electricity. Additionally, 74 in Cedar Ridge, 40 in the Big Hill area and 77 in Brentwood Park.

Update at 11:50am: The list of power outages in the Mother Lode has been growing as more snow continues to fall in the higher elevations. The area around Avery is the hardest hit with 912 customers without power. A little further up the road closer to Arnold there is an outage impacting 281 customers. Also in Calaveras County, there remains 29 customers without electricity north of Mountain Ranch.

In Twain Harte there are nearly 190 customers without power, 74 in Cedar Ridge, 40 in the Big Hill area and 77 in Brentwood Park. The various outages are expected to be restored between 2:30pm and 5pm.

Original story posted at 8am: Arnold, CA — There are scattered power outages popping up around the Mother Lode, with the greater Arnold area and Copperopolis currently being the hardest hit.

In the Arnold region, which is receiving considerable snowfall, there is an outage impacting 36 customers along Chamonix Drive near Fly-In Acres. 21 customers are also without power near Ebbetts Pass Highlands along Moran Road, 18 customers near Evergreen Drive and Pine Cone Drive and 22 customers near Murphys Drive, Tamarack Drive and Douglas Drive. Those Arnold area outages are expected to be fully restored between 10:30am – 11:45am.

In Cooperopolis there is single outage impacting 91 customers in the area of O’Byrnes Ferry Road, Main Street and Reeds Turnpike. Full restoration should come by 11:30am.