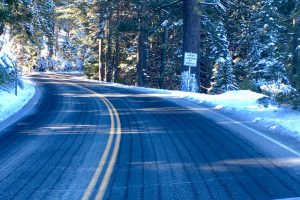 Twain Harte, CA — Many who have been traveling in the Twain Harte area this week have been wondering why Highway 108 appears to have black stripes across it.

Clarke Broadcasting has received phone calls from residents asking what is going on, as it is a new thing for that area this winter. Caltrans reports that crews used an anti-icing solution to pre-treat the highway so that snow and ice did not stick to the pavement, making it easier to clear with a snowplow. The Caltrans photos show the brine at work as it has attracted moisture, preventing it from freezing, and appearing black because it is transparent. It was put down in anticipation of this week’s snowfall.

Maintenance Supervisor Chris Baker says, “This is a relatively new process here, but the results have been very pleasing.”

Caltrans reports that it is similar to how spraying a light coat of cooking oil on a pan prevents food from sticking. The brine consists of 77-percent water and 23-percent sodium choloride (common table salt).