The Best And Brightest 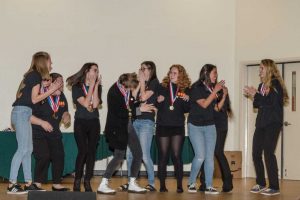 Sonora, CA — Mother Lode Schools competed in an academic decathlon to see who was at the head of the class and bring home the gold that come along with bragging rights.

With this year’s theme being Africa, the competition involved ten-events with test subjects including art, economics, language and literature, music, science, math, and social science. Students were also challenged with subjective testing, which included an essay, an interview, and a prepared and an impromptu speech. Students were placed in an Honors division, a Scholastic division, or a Varsity division based on their grade point average. Each team member competes in all ten events against other students in their divisions, with the top two individual scores from each division combined for an overall team score.

The public was treated to a special event called the “Super Quiz,” where the top nine students from each school went head to head. Gold, silver, and bronze medals were awarded for individual events and total team scores.

Bret Harte High School took home the team gold medal, a picture with the students’ names is in the image box.  The local champions will head to Sacramento to participate in the state competition in March. The winner of that will then go on to compete at the national finals in April in Garden Grove, California.