Theft Caught on Tape Led To One Arrest 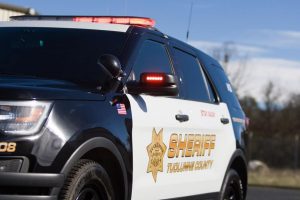 Jamestown, CA — Security cameras helped to catch a suspect who stole items out of a truck bed at a local casino.

The footage showed a man and a woman grabbing two chainsaws from the back of a pickup parked at the Chicken Ranch Casino in Jamestown earlier this month. The thieves then took off in a light colored sedan.

On Sunday afternoon, 30-year-old Ervina Hunt of Turlock, was spotted at the casino by staff, who recognized her as one of the suspects. Tuolumne County Sheriff’s Deputies were called to the scene and confirmed she was the woman in the surveillance video. Hunt was arrested but the chainsaws have not been recovered and her accomplice is still on the loose.