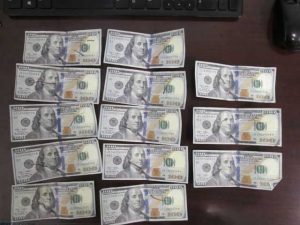 Sonora, CA – A Jamestown man arrested for vehicle theft in a neighboring county racks up more charges during his intake at the Tuolumne County Jail.

Oakdale Police arrested 32-year-old Andrew Edwards last night on a vehicle theft and resisting arrest warrant out of Tuolumne. The Oakdale officers released Edwards to Tuolumne County Sheriff’s Deputies who uncovered another crime. During his jail booking, 13 phony $100 bills were found on Edwards. Sgt. Andrea Benson explains that the money was marked with what is called a counterfeit currency detector pen, which will turn yellow if the bill is real or any other color if it is bad money. As can be seen in the image box picture, it turned blue signaling it was fake.

The sheriff’s department gives these additional tips to check for possible funny money:

One of the first things to look for when checking to see whether or not a bill is authentic is to see if the bill denomination on the bottom right hand corner has the right color shifting ink. All denominations of $5 or more have this security feature, going back to 1996. For example, on the bottom right hand corner of the $20 will have a copper color when you are looking straight at it. But, if you rotate the top of the bill down so that the bill looks flatter to your eye, it will turn more of a greenish color.
On the new $100 bills, the inkwell also has color shifting ink, turning green and becoming extra visible when shifted to a flatter visual plane.

All authentic US reserve notes have raised printing. Many times, counterfeiters have a tough time duplicating this kind of printing method.

If you notice significantly blurry borders, printing, or text, it is an automatic red flag. Authentic bills are extremely detailed, made using die-cut printing plates that are capable of fine lines. Printers are rarely capable of the same level of detail. Take a close look, especially at the borders, to see if there is any blurring.

If you take a close look at an authentic bill, you will see that there are small red and blue threads woven in and out within the fabric of the bill. Printers try to reproduce this effect by printing red and blue threads onto the bill in a similar pattern. But, a close look will often reveal that such printing is merely surface level, tipping you off to a counterfeit.

The next security feature to look for, is the characteristic watermark. In many of the new bills, the watermark is actually a replica of the face on the bill. In some, it is only an oval spot.

The security thread is one of the most distinctive security indicators of an authentic bill. If you hold any bill up to the light, you will see a security strip on an authentic bill. It will have “USA” and the Bill’s denomination, “USA 20” running vertically on the bill. The ultimate test is to put the bill under a uv or black light and make sure the bill glows the correct color. This extra security measure was originally added to provide a quick way for bar owners to check the legitimacy of a bill.

The newly printed $100 has an extra security feature. There is a visible blue security ribbon down the right middle of the bill that is 3D. If you move it back and forth, you will actually see the number 100 and a variety of little bells will move from side-to-side as the bill shifts.

If someone tries to pass a counterfeit bill or you have fallen victim to this kind of incident please report it to your local law enforcement agency.