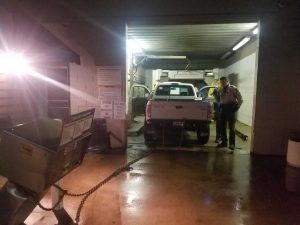 Sonora, CA — The Tuolumne County Sheriff’s Office is investigating an incident where suspects allegedly tried to rip the cash machine at a carwash out of the ground.

A stolen white Toyota pickup truck was found abandoned inside the Chip’s Chevron in Jamestown early yesterday morning. Sheriff’s office spokesperson, Sgt. Andrea Benson, reports that deputies determined that a woman, and two masked men, attached a large chain to the bumper of the stolen truck and tried to pull the cash machine. The truck, however, broke down, and the suspects fled the area.

The Sheriff’s Office reports that 45-year-old Narrie Alfaro was soon located nearby and arrested in connection to the crime. The two masked men remain at-large. An investigation into the incident is ongoing and anyone with information is requested to call the Tuolumne County Sheriff’s Office at 209-533-5815.