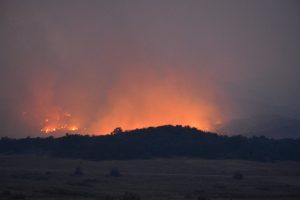 Ventura County, CA – The Thomas Fire burning in Santa Barbara and Ventura counties has reached 281,620 acres and is 86 percent contained this morning.

Over the weekend it secured the title of “Largest Fire” in state recorded history jumping the 2003 Cedar Fire in San Diego by 154 acres, which killed 15 people. The Thomas Fire began December 4th and no cause has yet been determined. The flames have destroyed more than a 1,000 structures with over 775 being homes, according to CAL Fire. The number of personnel battling the blaze has dropped from 2,512 to 1,586 including 116 fire engines, 61 fire crews, 26 water tenders, 19 dozers and 26 helicopters.

The fire has claimed two lives. A memorial service was held on Saturday for firefighter, 32-year-old Cory Iverson, who was killed fighting the flames. Gov. Jerry Brown joined family, friends and colleagues gathered at a San Diego church to honor Iverson, who was stationed out of that city. As reported here, he has local ties to the Mother Lode, as back in 2015 he was based at the Columbia Air Attack and drove a Heli-tender truck. A woman was also killed in the blaze as she was fleeing the flames.