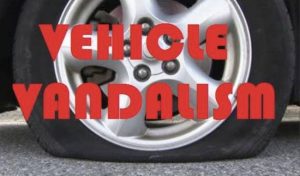 The police department was notified of the situation shortly after 7:45pm when a resident in the 400 block of Highway 49 heard a noise outside and soon discovered her tires had been punctured, as well as her boyfriend’s, and a neighbor’s. The police department responded and found many more impacted vehicles nearby. Anyone with information on the case is urged to call the Sonora Police Department at 209-532-8141.