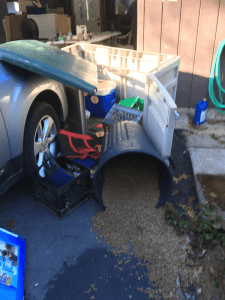 Sonora, CA — Anecdotal “bear scare” stories are leading some residents to wonder if black bear numbers are on the rise — or if one or two are now considering themselves locals.

Such may be the case in Columbia where Sandy and Dave Wynne have lived for more than 40 years without nary a bear issue — until recently — about a bear visit to their property, which is located about a mile off Yankee Hill Road. Then, according to Sandy, about a month ago a bear made a nocturnal raid of their carport.

“We have this very heavy [100-plus pound] container for dog food that we keep — and there were claw marks all the way through the lid,” she recalls, adding that the bear subsequently flung the whole thing across their car. That same night it rummaged through their neighbors’ five garbage cans. (To see some related photos click into the image box slideshow.)

“We have spotted the bear once or twice and it is still hitting local garbage cans although not for a week to week and a half now,” Wynne reports. She muses that perhaps it is getting ready to hibernate, maybe in one of the plentiful nearby caverns. “It has been a big year for deer and turkeys everywhere — even the dogs cannot keep them under control,” she confides. With more than a note of concern she continues, “But a bear is big enough that I don’t want to come face to face with him. The cats have their hiding places and are watching for it.”

Asked if she or her husband reported the sighting, Wynne replies, “A neighbor called [state Fish and Wildlife Department] but hadn’t heard anything substantive back. I’d like to think that [the bear] won’t come into our house but how do you know? This time he just made a mess but who’s to say that next time wouldn’t be worse? We were inside but could have been outside.”

Family friend Jerry Day, who took a photo of the bear-mauled container lid drily notes that the animal who did it was not a cub — and that others in Columbia have reported the bear to authorities. “A few months back my uncle on Jackass Hill had one on his back porch, staring at them through the sliding glass door,” he states. Shrugging, he says he wonders if it might be the same one, additionally sharing that his pal Jody Dugan above Sonora is also dealing with an active bear situation.

Dugan, who has made his home above Phoenix Lake Estates in a wildland interface for the past six years and was also raised in nearby Cedar Ridge says that in his neck of the woods it is not uncommon to catch glimpses of wildlife, including an occasional bear. Recently, however — and for what he estimates is the second time in five years — Dugan recalls three nocturnal sightings of what he believes is the same black bear at different locations on his property. He notes, “It’s not a cub. It’s a smaller adult, I think and seems very skittish. I get out there on the deck with my bb gun to make some noise — I would never try to face the bear — and on one occasion it climbed into a 30-foot tree in about 30 seconds,” he recounts.

Then one day around high noon Dugan admits to being shocked as he nearly — literally — ran across the animal as it lumbered onto the roadway. “Directly up the hill is Big Hill Road by the apple ranch is where I almost hit it. So that is three sightings and [another episode] where I almost hit it — all within a two-month period,” he emphasizes. While it has been three weeks since, he says his sightings are generally occurring around three weeks apart. Pondering further Dugan offers, “He’s making his rounds and it seems unusual that he is making his home near a residential area  — although last year a neighbor saw a bear come in and grab a 25-pound of dog food right out of the garage!”

Besides pumping up the bb gun to make a racket, Dugan says he and his family practice being safe to not attract wildlife. “We don’t throw food outside and we keep our trash about 300 feet from the house,” he stresses.

Asked if bear numbers are increasing in the Mother Lode, California Department of Fish and Wildlife (CDFW) spokesperson Kyle Orr replies that the answer is somewhat complicated. “Our department estimates that there are approximately 35,000 black bears in California and that the population is growing.” However, he adds, “Bear activity can fluctuate in different regions in different areas in different years.” Providing an example Orr points to a sharp, weird spike in bear reports coming from the Bakersfield area two or three summers ago that was at least 20 times as many as it would be in a given season.

Orr continues, “So it is certainly possible people are seeing more [in Tuolumne County] right now but it is also a busy time for bears. They are preparing for winter and eating as much as possible in preparation for hibernating or denning…and they tend to roam a little more than normal this time of year in search of food.”

He emphasizes that while CDFW cannot respond to every sighting and rural residents naturally share habitat with bears who are out there “just being bears,” the department will become involved when there is a public safety issue and when the animals become habituated. “The primary source of human-bear negative interactions is when bears get access to human food, either when they are being deliberately and illegally fed by people or when people are inadvertently allowing bears access to human food,” Orr states. The hardest part is that once a bear gets hooked on such a food supply it becomes a very hard pattern to break; simply catching and relocating it to another area is just moving an already-established problem into someone else’s neighborhood.

Besides notifying CDFW, residents experiencing bear sightings in continued close proximity to residences should also take immediate action to remove possible food sources. “It can be something as simple as keeping your trash secured as much as possible until the moment when you need to put it out for collection,” Orr stresses. While bear-proof cans are not 100 percent effective, they can be an inhibitor. Dwellers close to wildlife interfaces might consider other options such as motion-activated lights, sprinklers or electric bear-exclusion fencing, certainly all of which have associated cost impacts.

“When living with wildlife people can certainly do their best to take sensible precautions to minimize conflicts. That being said, they are still going to happen,” Orr says, matter-of-factly. At the top of his helpful tip list, Orr offers that blocking off any crawl spaces around homes and outbuildings will remove them as a possible bear hibernation or sheltering place. “In a yard, make loud noises to haze it — avoid interacting — and do not get between a sow and her cubs or a bear and a food source,” he specifies. For bears that do property damage or kill pets, residents may apply for a depredation permit to allow that bear to be killed.

Because bears can and do occasionally break into houses — and vehicles — when they smell food, he advises folks when that happens to not interact but to immediately get out of potential harm’s way. Since a CDFW warden may not be in close enough proximity to offer immediate assistance the very next thing to do is dial 911 for first responder help.

“There has never been a verified fatality of a [black] bear attacking a human being in California, although they do — upon occasion — attack and they are very big predators at 300 to 800 pounds in CA,” Orr maintains. “Generally speaking, they are not aggressive and do not want to attack humans — but they do like human food and want to get at it.” For more details on how to protect against unwanted bear activities and report potentially hazardous situations to state wardens, click here.