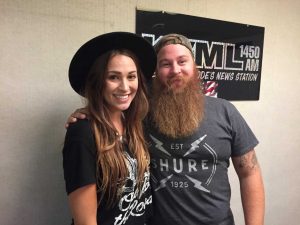 The Vietnam Veterans of America, Chapter 391, will benefit from an all afternoon and evening fundraising event in Twain Harte this Saturday.

Scott and Maggie Little of the country music group Cottonwood Creek, were Thursday’s KVML “Newsmaker of the Day”.

Cottonwood Creek is one of the featured musical acts that will be performing at “Lazy Dayz Unleashed” at the Lazy Z Resort in Twain Harte.

Other bands scheduled to perform include Risky Biscuits, The Brothers Strong, T-Bird and the Daggers and The Fabulous Off Brothers.

Scott Little grew up in Mariposa County and Maggie is from the Central Valley. As a married country duo, the two have gained rapid popularity throughout northern and central California.

They released their debut CD earlier this year, which was recorded in Nashville.

“We went all out,” said Scott. “We decided not to skimp on it, since our music is everything to us. We wanted to give this CD what it deserves.”

“We have national ambitions” said Maggie, “It’s somewhat difficult for us as an independent group without a major record label, but we are touring a lot.”

Cottonwood Creek is proud to be a part of this Saturday’s Vietnam Veterans of America, Chapter 391 fundraiser.

“Lazy Dayz Unleashed” will run from 3 to 10 PM on Saturday. The event will also feature plenty of food, beverages, a beer garden, wine tasting and a few vendors near the poolside outdoor atmosphere of the Lazy Z Resort.

Tickets may be purchased online at lazydayzunleashed.com and will also be available at the door for an additional $5. Each purchased ticket to the fundraiser includes one monogrammed drink glass and one raffle ticket.