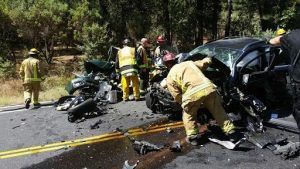 Calaveras County, CA — Three people were airlifted to hospitals in the Central Valley following a weekend head-on crash on Highway 4 near Forrest Meadows.

The CHP reports that 61-year-old Donald Burns of Arnold was driving a 2013 Ford Escape eastbound on Highway 4 near Sunset Ridge Court when he reportedly fell asleep and drifted into the opposing traffic lane. His vehicle collided with a 2013 Subaru Outback driven by 65-year-old Ruth Barber of Cerritos, California. She and her lone passenger, 73-year-old Wayne Barber, suffered “major injuries” and were flown to Doctors Medical Center in Modesto.

Burns also suffered “major injuries” and was flown to Memorial Medical Center in Modesto. The CHP reports that drugs and/or alcohol do not appear to be a factor in the crash. It occurred at 2:25pm on Saturday. No additional information is immediately available.