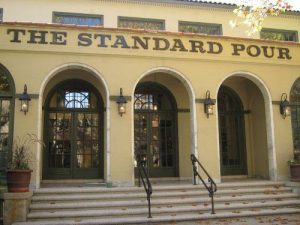 Sonora, CA –Two ABC licenses in the transfer process, signaling some intriguing local business changes in the works, are among numerous business activities to report.

The transitioning underway of the Standard Pour’s ABC license to “The Pour LLC,” as Standard Pour owner Eric Davis confides, is a passing of the torch to the management team that has been with him since its beginning six years ago, helping him hone its “craft beer, fine wine, killer food” standard.

Reassuring fans of the popular eatery at 19040 Standard Road, Davis shares that plans made with his manager Season Ingram, her husband Isaac, and assistant manager Meg McMahon for the buy-out include an escrow closing at the end of August or in early September. However, patrons will probably not even notice the hand-off because they plan to maintain the restaurant name, menu and existing personnel. In fact, Davis, as a mentor/consultant will remain a fixture. As he explains, “I am available for them and will be involved as long or as deeply as they would like.”

Davis says that after over 27 years owning restaurants in town — operating at what can become a brutal six to seven-day a week lunch and dinner pace – he is feeling somewhat beyond excited for what he describes as “a very cool opportunity” to ensure that the Pour stays “in the family,” so to speak, and carve out more time for himself. However, with more time on his hands, Davis confides his thoughts are less about relaxing and more towards channeling his passions for food and wine into wine education events and or programs in Sonora, to see where that takes him, projecting “perhaps [to] build out a small space” to hold happenings.”

Sleuthing another ABC license transfer in progress, it seems things will soon be shaking at the space formerly known as Europa Deli, Sports Bar & Grill in downtown Sonora at 275 S Washington St. Located in a historic building, its currently unusable upstairs, which is reportedly packed with tiny rooms and straw-pallet beds reflect a possible past as a low-rent boardinghouse or brothel. While the downstairs restaurant/bar has been in operation on and off over the years, it last shuttered about two summers ago.

In a short conversation with Clarke Broadcasting this week, the co-owner of popular family-run business in Pacifica called Winters Tavern, confirmed that while it was still a month or two too early to share details, “The Winters storm is coming” to Sonora. CJ Valenti, along with his wife and business partner Corinne Robinson — a Sonora High graduate — are sharing hints on social media that their new location will be called Winters Tavern East and that it will maintain similar values as the Pacifica location; namely locally-sourced beers (“no crap on tap”), food and live music.

As far as business overall, Sarno says things sure feel like they are beginning to boom. “From what I have heard from the merchants, it has been a good year from them — and tourism is up…the bed and breakfasts reporting that they are full during the week.” She marvels, “There just seems to be an increased amount of energy coming downtown again…and what seems to be an influx in the owners [among] Millennials, which is really great.” Sarno speculates they are attracted by the quality of life with a less hectic pace, not to mention new business opportunities and much lower costs of living than, say the Bay Area. Enthusing, she states “There is an added energy at the monthly merchant meetings at City Hall…[the younger owners] are staying current with what is going on, sharing improvements they would like to see — and the City is listening, which is good.”

Noting that today marks the official opening of Maurice’s, a national retailer of women’s clothing “sizes 1 to 26,” in the Crossroads Shopping Center where Hallmark was formerly housed, Tuolumne County Economic Development Authority (TCEDA) CEO Larry Cope says his office is busily working with a number of prospects there and at The Junction to fill the few remaining spots. Downtown Sonora’s Umpqua Bank (229 S. Washington St.), which is closing August 31, may result in a desirable space becoming available soon, he adds.

“Right now with the downtown being as filled as it is — compared to even a year ago — I see good things — but again it is going to depend on how well the state and national economies go,” Cope confides. Among his top-of-head noteworthy new business notes, Cope points to the recent openings of Super Cuts in the Crossroads Shopping Center next to where a T-Mobile store will shortly open its doors for business; Sonora Creamery in Sonora Plaza Shopping Center; Les Schwab (14885 Mono Way); Shiro Ninja Japanese Bar & Grill (147 S. Washington St., downtown); also Pete’s Restaurant in a spot formerly occupied by the Homestead (1210 Sanguinetti Road).

Now that TCEDA has passed the management torch of the Central Sierra Economic Development District to Mother Lode Job Training, a move that went into effect July 1, Cope shares that his office is concentrating focused energies on attracting businesses, living and family wage jobs to Tuolumne County.

Too, he maintains, with so many job prospects currently available it is a seekers market. “Almost every one of my manfacturers are looking for good workers…same with local retailers. There are also plenty of job opportunities at [Adventist Health Sonora] and Black Oak Casino Resort,” he remarks.

Through the auspices of Mother Lode Job Training vast resources locally exist for job seekers and those wanting to bridge into new careers. As Cope puts it, “They can help them find, look and qualify for jobs here…and there’s opportunities for scholarships and work-based learning.” He emphasizes, “If someone wants a job, there are definitely opportunities — out there right now.”