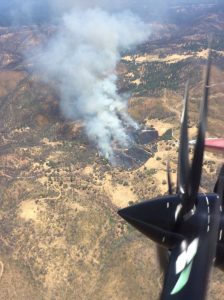 Original post at 1:20 p.m.: San Andreas, CA — The Maria Fire, which ignited Monday afternoon is now being reported by CAL Fire officials as 117 acres, which is more than twice Monday night’s report.

CAL Fire officials from the Sacramento command center say the size increase is due to improved mapping. Tuolumne-Calaveras Unit officials who were still estimating it at Monday evening’s description of 55 acres later confirmed the figure. Containment has increased from 40 percent up to 50 percent. The fire center is located in the area of Jesus Maria Road near Music Gulch Road near Mokelumne Hill in Calaveras County. Since the area is within the Butte Fire footprint, extensive mop up is underway. The cause of the blaze is still being investigated.

Images of the blaze, including from the air may be viewed in the image box slideshow. A couple of homes were evacuated Monday in the area of Old Gulch Road as a precaution.