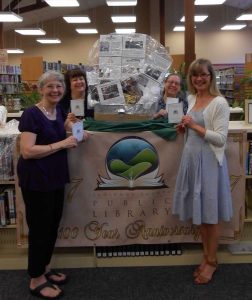 Sonora, CA – Now that July Fourth is past Tuolumne County Public Library staff and friends are clamoring for the public to take part in its 100th birthday festivities through month’s end.

“Most people in the county know about the main library located in Sonora,” comments Chrys Day, President of Friends of the Tuolumne County Library. Since many may be unaware of the Groveland, Twain Harte and Tuolumne City branches — or the services offered by the county’s bookmobile — her group and the library staff have put in a lot of thought and time to mark the centennial by organizing a number of celebratory all-ages activities. These they they hope will encourage folks to visit the libraries and actively experience all they have to offer.

Day emphasizes that one of the activities being promoted, Passport to Festivities, provides fun incentives for people to visit not only the libraries, but also museums, state parks, and to shop, dine and be active along the way. “Many local businesses are partnering with us to encourage people to get out and explore the county. These businesses have donated products and services for the raffle basket, or they are providing discounts to the passport participants for shopping, dining, and activities,” she explains.

Anyone participating in the month-long passport challenge, which involves visiting the dozen required destinations will then become eligible to win a grand prize basket heaped high with a host of local products and gift certificates for local services. Passports can be picked up at any library branch and at the Tuolumne County Visitors Bureau in downtown Sonora.

It was back in 1911 when the California State Legislature passed a law that first authorized boards of supervisors to establish free county libraries. According to local history, while the Tuolumne County Board of Supervisors was petitioned to do so, it did not seriously act upon it until after women received the right to vote in 1912, after which the Women’s Christian Temperance Union and the Sonora Aronos Club became involved and began prodding. In tandem with the times, the state librarian dispatched Miss Harriet G. Eddy, who was tasked with aiding efforts to help establish a local library system. Historians credit her wily research, outreach and campaign skills in accomplishing the mission.

Subsequently, on July 3, 1917 the Board of Supervisors voted unanimously to establish a County Free Library, initially housed within a 280-square foot courthouse basement space known as the old county archives room. It was Miss Edna Holroyd, a professional hired from the outside, who was chosen to serve as the first county librarian at a salary of $100 per month, which at the time was the maximum permitted by law. Two years later the supervisors passed an amendment to raise her salary by $25, indicating they were pleased by her progress in organizing the library and establishing branch locations. Her initial budget for book purchases was recorded as $400.

Several events and activities are planned throughout July involving all the branches, including Tuolumne City’s, which recently reopened after extensive repairs that became necessary in the wake of this past winter’s extreme wet weather. Among those calendared to begin mid-month is a birthday cake celebration and concert scheduled Tuesday, July 18, from 2 to 5 p.m. at Sonora Main Library, with BZ Smith and Peggy Reza performing songs and stories from their award-winning CD, Striking Up Gold Mountain. For more details on this and other activities planned, click here.