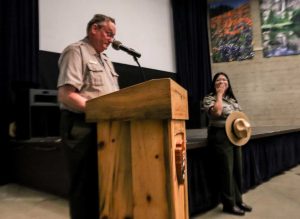 Park Ranger Sharon Miyako was awarded the 2016 Barry Hance Memorial Award last week at a ceremony attended by a packed house of nearly 300 people, including former recipients. Hance was killed by an avalanche while plowing Tioga Road in 1995. Peers nominate candidates who exemplify the qualities and attributes of Hance, which include team work, a positive attitude, concern for the public and fellow employees, public service, and a deep love for Yosemite, according to park officials.

Rangers who nominated Miyako stated they did so because of her “eternal positive attitude and a heart of gold.” They praised her for listening to concerns and “bending over backwards to accommodate the needs of others whether they are her staff, her supervisors, community members or visitors.”

Miyako has been a park employee since 2007. For the past several years, she has served as a mentor and is currently a Supervisory Park Ranger. “There are two best parts of my job,” acknowledged Miyako, “helping seasonal interpreters grow, channel their passion, and figure out what they love to do….and helping visitors fall in love with Yosemite. It’s an amazing privilege.”