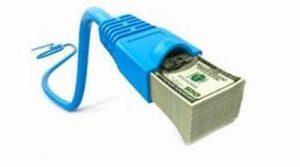 Sonora, CA – Scammers are getting trickier, ironically, sometimes while targeting victims who, themselves are looking for ways to make a few bucks.

According to Tuolumne County Sheriff’s spokesperson Sgt. Andrea Benson, a Jamestown woman nearly became a recent victim of wire transfer fraud. While seeking money-making opportunities, Sgt. Benson said the woman found an email in her In box offering her the opportunity to earn $450 a month by allowing her car to be wrapped with advertising information.

Sgt. Benson reports that the woman subsequently received a J.P. Morgan Chase-issued check for $1,900 and was instructed to deposit the money into her account — and then to wire $1,400 to a business out of state. According to the instructions, once that business received the funds it would send someone to wrap her vehicle and she would retain $500 of the money. The woman recognized that the process sounded fishy and did some online research, which provided information on various wire transfer scams that have successfully victimized others.

“These are popular among thieves as the [wire transfer] scammers are nearly impossible to trace,” Sgt. Benson states. “They provide fake names, addresses, phone numbers and contact information. The victim deposits the check, the money is withdrawn and then wired. Once money is wired it is immediately accessible to the scammers. Several days later when the check is thoroughly processed, it is then discovered to be a fake.”

Benson adds that, these days, it is all too easy for scammers to find phone numbers, email addresses and minimal contact information to target potential victims. Too, she says, “The number listed on your caller ID could show the call is coming from out of state, when in fact it is being made from another country or it may be blocked entirely. Scammers are able to create fake numbers or 1-800 numbers online. So do not wire money to anyone who solicits you.”

She urges folks, “Do your own research. Look up the business name, address, phone number. Legitimate businesses are not going to send you money before services are rendered. If the proposition seems like ‘easy money’ or ‘too good to be true’ that is a strong indication that it probably is.” Worse, when you do realize, sometimes several days later, that you do become a victim, it is impossible to retrieve or get your money back.”