Opposition To Sanctuary State And Support For Actions In Syria 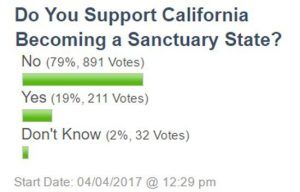 The poll directly related to the Senate passing SB54 on a 27-12 vote which would prevent state and local law enforcement agencies from helping investigate immigration violations or inquire about someone’s immigration status. The Assembly has yet to pass a similar bill to ban police and sheriffs from arresting or detaining people just for immigration violations unless a judge issues a warrant. According to the AP amendments to SB54 make it easier for local law enforcement to hand over criminals to federal immigration officials if they were previously deported for a violent felony but there is a provision to limit immigration enforcement activities in schools, courthouses and other public facilities. February’s KVML “Newsmaker of the Day” was Senate Democratic leader Kevin de León who supported SB54 with details here.

The Associated Press reports California is home to an estimated 2.3 million immigrants who do not have legal authorization. San Francisco, which is among cities with its own sanctuary law, is suing over Trump’s executive order to suspend visa processing citizens of Iran, Somalia, Sudan, Yemen, Syria and Libya for 90-days.

Another recent informal poll asked “Do You Support How The US Missile Strike Was Handled In Syria? When the poll closed 57 percent answered they fully support it, but the number in support was higher within 24 hours of the poll being posted on Friday with 62 percent in favor. Another 13 percent mostly support it while only 16 percent don’t support it and 9 percent were not sure.

Local Congressman Tom McClintock released this statement regarding the U.S. attack on Syria: “The Syrian government’s use of chemical weapons is an atrocity and a war crime, but it is not “a national emergency created by an attack upon the United States, its territories or possessions, or its armed forces” as provided in the War Powers Resolution.  No matter how strongly we may feel about the actions of the Syrian government, the President had no legal or constitutional authority to order this attack without the consent of Congress.  This action crosses a bright line that separates the fundamental powers of our government and risks a constitutional crisis if continued.”