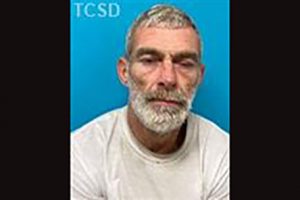 Jamestown, CA — A patrol check in the Jamestown area resulted in the arrest of a Sonora man wanted on felony warrants who was also found to be carrying a knife.

While patrolling in the Rawhide Road area recently, a Tuolumne County Sheriff’s Deputy noticed a man standing in a large field. The deputy quickly recognized him to be 49-year-old John McCarthy, who had felony warrants for his arrest. Those warrants included a grand theft charge for property items stolen worth more than $950. What he was doing in the field was not immediately known.

The deputy stopped McCarthy and arrested him without incident. A search of his person turned up a fixed-blade knife concealed in his back pocket, according to sheriff’s officials, which is against the law in California. McCarthey faces possible charges of possession of a concealed dirk or dagger along with his other warrants.