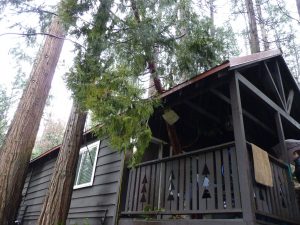 Twain Harte, CA — Tree mortality, already an issue due to bark beetle damage and the extreme nature of this season’s storms, is now on the rise due to over-saturated soils.

Lauralee Brown, a local homeowner of a wooded property near Twain Harte, shares how one of her tenants called her after, literally, experiencing a close shave this past Friday morning, compliments of a cedar tree. Brown describes her property on South Fork Road as located about a mile and a half from the Twain Harte post office, heading towards Brentwood Lake. Recounting heading out there to check out the damage. “What I saw was…the top where about a half of a cedar tree that had flown off…pierced the roof of my cottage – I have a main house and a cottage — it came straight through.”

Shuddering, she continues, “The tenant was sitting about three feet inside of the cottage… He was not injured, thank God. But the problem right now is I have had all my trees looked at. None of them that are falling – and this is the second one within a week — were marked. [The professionals] said everything was fine, but obviously they are not. These are two [freshly downed trees] that were not marked.”

The other one — also a cedar — that fell a few days ago, crashed through Brown’s carport. As she was arriving to check out that damage another tree — again, a cedar — fell on a property across the street from her property into a transformer. She remarks she was told that bark beetles are known to attack pines and that her cedars were not at risk. Brown is clearly worried about the multiple trees around her property within striking distance of structures that might only appear to be all right. She also notes the beginnings of a mudslide around a large tree anchoring the hill by the already impacted cottage that now looks ready to fall.

As those with homeowners’ policies are able to do, Brown filed a claim with her insurance agency. Being in a fire hazard area, she emphasizes that it was not easy to obtain that coverage. She also called county to see what potential resources she might be able to tap. Considered low-income even though she is a homeowner, she notes that she has two other tenants on her property, one who is disabled.

As reported here, tree-felling assistance for elderly, low-income and disabled landowners is available through a multi-agency effort. As reported here, Tuolumne County government officials have recently secured additional monies earmarked to help private homeowners through a CAL Fire grant. Brown says she is grateful for whatever she might be able to qualify for and hopes the application processes will not be cumbersome. After all, she points out, “I need help now — and I do not know what I would do if I did not have these resources potentially available.”