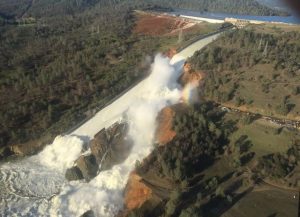 The order has been reduced to a warning. The decision took into account lower lake levels, and updated weather forecasts. However, Butte County Sheriff Kory Honea cautions, “It allows people to return to their homes. Allows people to resume their businesses, but we’re telling them that they have to be vigilant. They have to pay attention to what is going on.  There is the prospect that we could issue another evacuation order if the circumstances change and the risk increases.”

Residents were allowed back into their home at 1 p.m. but the sheriff did not elaborate on any plan or schedule for that to happen. The Butte County Sheriff’s Dept. provided this list of factors for making the decision to lift the evacuation order:

The decision to reduce the Immediate Evacuation Order to an Evacuation Warning is based on a number of factors, including:

Governor Jerry Brown also reacted to a report that surfaced Monday indicating environmentalists raised concerns about the Oroville Dam emergency spillway in 2005.  He says he’s glad he found out about the report and adds that it was not part of previous records he had seen. The Governor commented that this as well as other details surrounding the failed spillway will be getting scrutiny over the next few weeks. Asked if more infrastructure and other things will now receive heavier scrutiny and attention, the Governor responded, “Stuff happens and we respond. This is part of the ordinary process and in that sense it will be helpful to stimulate infrastructure analysis and more infrastructure investment.”