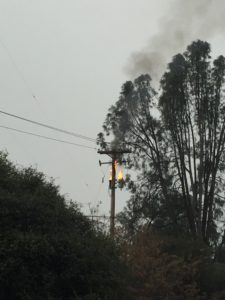 Update at 5:30am: A Comcast internet outage, related to the storm, impacted many businesses in Tuolumne County yesterday afternoon, including myMotherLode.com. While the internet was out, myMotherLode.com was reduced to a single homepage, and utilized a backup provider, in order to post the latest storm information. The internet returned late last night. Yesterday’s storm related information is posted below:

Update at 6:45 p.m.: Visitors to Yosemite are being asked to arrive after noon on Friday due to the overnight storm. Park officials are concerned that flooding and debris could make the roadways hazardous.  In Calaveras County, PG&E reports a new power outage in the Bear Valley area impacting 196 customers with no estimated repair time. Crews have been able to restore power to 141 customers in the Paloma area near Valley Springs.

Update at 6:05 p.m.: PG&E crews are working hard on several power outages in the Mother Lode. Originally, 2,060 PG&E customers were without power in the Sonora area including the downtown corridor. That number has dropped to around 300 including the areas near Fairview Lane,  Red Maple Circle off Greenley and Morning Star drive. There are currently no estimated repair times. Shaws Flat Rd and Highway 49 estimated repair time shows 8:43 p.m. The repair time has been pushed up for 141 customers in the Paloma area of Calaveras County from 8 p.m. to 6:45 p.m.

Update at 5:30 p.m.: PG&E is making progress on the power outages in the Mother Lode. Originally, 2,060 PG&E customers are without power in Sonora including the downtown area. That number has dropped to around 250 including the areas across from the Mother Lode Fairgrounds along Fair View Lane, off Greenley and Morning Star roads. There is no estimated repair times. The repair time has been pushed back for 141 customers in the Paloma area of Calaveras County from 7:15 to 8 p.m.

Update at 4:40 p.m.: On HWY 49 near Rawhide Road and Poppy Hill Road there is a report of water rushing over the roadway.

Update at 4:23 p.m.: An additional 140 people are with out power in the Paloma area near Valley Springs. The cause is unknown and the restoration time is 7:15 p.m. Stoplights are now blinking along Mono Way at the intersections of Fir Drive, Restano Way, Greenley and Sanguenetti roads. There is a report confirmed with a photo that the Sonora Wal-Mart was hit twice, there is a darkened area in the ceiling above where the shopping carts are stored employees reported the building being hit directly twice by lightning. The concussive blast triggered the fire doors alarms and the store Manager went around silencing each one.  There are no reports of injuries directly related to this electrical storm at the time. Clarke Broadcasting’s Engineer was at our broadcast tower, which was struck by lightning as well. He was not injured. Sonora Elementary is releasing the After School Program Students due to the Power Outage, the 3rd grade play scheduled for tonight has also been canceled.

Update at 4 p.m.: Sonora Police report that Sanguenetti Road is down to one-way traffic control on the eastbound lane. PG&E reports 2,060 without power in downtown Sonora due to a damaged power pole. PG&E estimates power will be restored by 6pm. Two other outages, with unknown cause one is in the Copper cove subdivision 189 people are reported out. Estimated time is 5pm to restore their power. The other outage is at South of Groveland and West of Yosemite Pines RV Resport and Family Lodge reports another 107 without power. Power due to be restored there by 6:30pm according to PG&E.

Update at 3:45 p.m.: Tuolumne County Sheriff’s Department reports that the county phone system is down , which includes all county departments except the sheriff’s dispatch.

Original post at 3 p.m.: Sonora, CA — The Mother Lodes latest storm arrived with a crashing boom around 2:30 p.m.  Many in downtown Sonora, including Clarke Broadcasting studios, were startled by a sudden boom of thunder that resonated for several seconds accompanied by a strobe flash of lightning.  Immediately afterwards, reports came in of impacts, among these firefighters are responding to a reported transformer explosion in the same area at the intersection of Mono Way and Sanguenetti Road.  Additionally, several stoplights are out along Mono Way.  A driver’s eyewitness account of the initial strike to Clarke Broadcasting reports she was in her car at the Restano Way and South Washington Street intersection and the stoplight when all of her car windows began to shake and she saw a bright flash of light.

A reminder to motorists please make sure you have your lights on.  We’ll bring you further impacts from the storm as soon as they come into the news center.