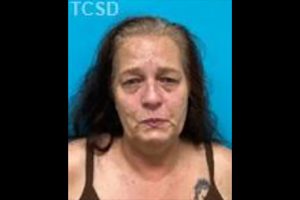 Sonora, CA – An argument between two neighbors resulted in one being handcuffed on elder abuse charges.

Friday evening, Tuolumne Sheriff’s Deputies were called to the Quail Hollow Apartments in the 12800 block of Chukar Circle near Greenley Road in Sonora for a report of a physical altercation. When deputies arrived, they spoke to both parties involved and witnesses regarding the altercation. They also learned that 51-year-old Tonia Love and the elderly victim had a history of prior fights and arguments.

In this instance, the victim reported Love had trespassed by sitting in a chair in front of her apartment. The victim detailed that when she confronted Love about moving from the chair, an argument ensued, resulting in Love striking her. It erupted into a physical fight between the two. The victim also stated that while she was attempting to retreat into her apartment, Love followed her, continuing the physical fight.

Neither party reported being hurt in the brawl. Love was arrested on a $35,000 bond on charges of physical elder abuse.