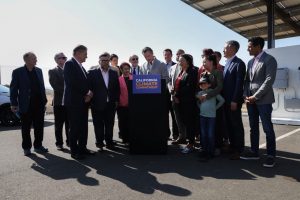 The legislation includes requiring that California be carbon neutral by 2045, meaning that the state removes as much carbon from the atmosphere as it emits. Another bill bans drilling new oil and gas wells within 3,200 feet of homes, schools, and neighborhood gathering sites. It will also spend $ 54 billion on a variety of efforts, including reducing emissions from the state’s electrical grid and boosting technologies to capture and remove carbon pollution.

Newsom argues, “Together with the Legislature, California is taking the most aggressive action on climate our nation has ever seen. We’re cleaning the air we breathe, holding the big polluters accountable, and ushering in a new era for clean energy.”

Assembly GOP leader James Gallagher is voicing out in opposition. He argues, “These climate change bills are going to heap more costs onto potential homeowners and businesses, all while making our already-unreliable energy grid even more unreliable. It becomes clearer each day that Democrats don’t care about affordability, just about following their radical ideology and letting Governor Newsom grandstand for his Presidential run. There are better ways to fight climate change that won’t drive up costs, drive people out of state, and drive up the state’s poverty rate.”

The oil industry has also broadly criticized the package, noting that it will harm an industry that provides many jobs. California is the seventh largest oil-producing state. Newsom counters that the legislation will create different jobs.