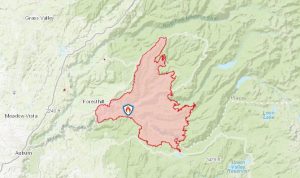 The heavy rain in the Mosquito Fire burn area up in Placer and El Dorado counties is somewhat a mixed bag, according to officials.

On the one hand, incident command spokesperson Dave Saldavini says it is knocking down the flames. Adding, “It has really diminished the fire behavior and allowed us to get in and do some really good work.”

On the other hand, there is a Flash Flood Watch for the burn area, issued by the National Weather Service, due to the continuing heavy rain. It runs through tomorrow. Fire officials are concerned about the possibility of ash and debris flows, and the potential impacts in the surrounding communities. The fire is 76,200 acres and 39 percent contained.

3,700 firefighters remain assigned to the incident, 78 structures have been destroyed, and an additional 13 have been damaged. Some of the earlier evacuation orders were lifted over the weekend.