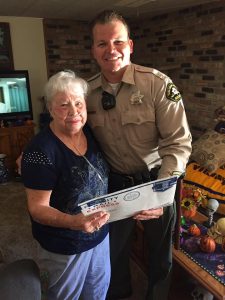 TCSO Dep. Riley with Rae Ann, after the return of $7,000 that may have otherwise been scammed from her.

Sonora, CA – Reports of attempted scams targeting senior citizens, common in the Mother Lode, sometimes result in cautionary tales. Here is one with a happy ending due to a local deputy’s diligence.

Tuolumne County sheriff’s officials share that an 81-year-old Sonora woman they are simply referring to as Rae Ann, was nearly blindsided by a flimflam artist purporting to represent Publishers Clearing House.

The person, whose identity remains a mystery, told the woman she had won a $3.5 million prize and requested her bank account information so that $7,000 could be initially deposited into her account. She provided that information, according to sheriff’s spokesperson Sgt. Andrea Benson, and saw that a deposit in the amount of $7,000 was made into her account. However, what she did not notice was that the money was actually transferred there from her savings.

“After the deposit, the suspects called her back and requested that she go to the bank and withdraw the $7,000 and send it to them in Louisiana,” Sgt. Benson further recounts. “The bank became concerned and contacted the sheriff’s office to report the incident. When Deputy Riley met with Rae Ann, she told him the $7,000 [she had sent, as requested] was her life savings.”

Dep. Riley subsequently contacted a postal inspector who successfully located the parcel containing the check in Louisiana. Although it was set to be delivered in a few hours, the inspector was able to have it intercepted. Once it was safely back in Sonora Dep. Riley helped personally return it to Rae Ann.

“She was extremely grateful and hugged Dep. Riley,” Sgt. Benson happily reports. She adds, “Making a real difference in people’s lives and treating them with care and concern is what police work is all about.” Law officials advise of the importance to keep in mind that when contacted by a stranger with news that seems too good to be true, it often is. In order to avoid being swindled by a scammer the best course of action is to thoroughly check out the surrounding circumstances and also make sure to get — and verify — the person’s identification.