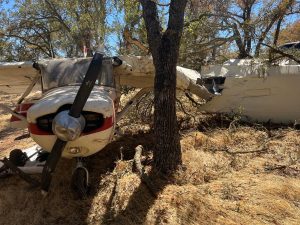 Valley Springs, CA – A close call for the pilot and passenger of a single-engine plane that careened off the runway of the Lake Camanche Airstrip in Valley Springs north of Highway 12 yesterday afternoon.

A caller reported a plane down off the private dirt runway in the 1800 block of Brandy Lane, off Burson Road, and east of Camanche Reservoir. Calaveras Consolidated Firefighters responded with two engines, and when firefighters arrived, they discovered the two-seater aircraft had gone into some trees. One of the wings of the plane smashed into a tree, causing the plane to leak fuel onto the dirt ground below. The occupants were not injured.

The plane was attempting to take off, but never actually got off the ground. Calaveras Consolidated Fire officials detailed that the plane was based out of Lodi Airport. They added, “The FAA and NTSB were notified about the accident and approved a salvage company to recover the wreckage.”