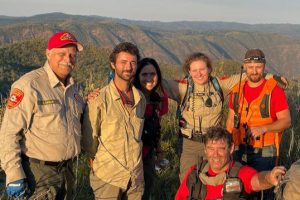 Tuolumne County, CA – An emergency spot beacon helped save the life of a severely dehydrated hiker, but it was not easy for rescuers to get to him.

On Thursday, July 28th, just after 11 p.m., Tuolumne Sheriff’s officials received a report of an emergency spot beacon activation for a severely dehydrated man in the area of Clavey River Canyon northeast of Groveland. The activated beacon coordinates pinpointed his precise location, which was in rough terrain.

Volunteer Search and Rescue (SAR) members used a side-by-side vehicle and ATVS most of the way, but with only about two miles left, the thick brush and steep terrain forced them to hike the rest of the way. They reached the man around 5:30 a.m. and immediately gave him water to rehydrate. Then head back out the way they came in to get him back safely.

The picture in the image box was taken just after the group returned. As sheriff’s officials noted, “Nothing like a Tuolumne County sunrise after an all-nighter. Thanks to our wonderful volunteers for their dedication.”